Out of this World with Chris Hadfield 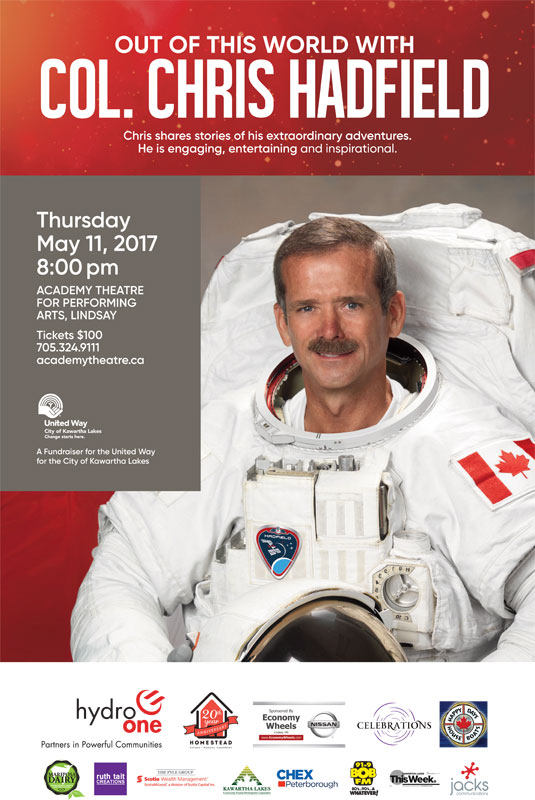 Our Out of This World with Colonel Chris Hadfield was a big success! $40,000 was raised for the United Way for the City of Kawartha Lakes!

A huge thank you to all of our sponsors.

The United Way for City of Kawartha Lakes is pleased to announce that Col. Chris Hadfield will be presenting his colourful and inspirational keynote address at the Academy Theatre in Lindsay, Ontario on Thursday, May 11, 2017 at 8:00p.m.

Col. Chris Hadfield was raised on a corn farm in Ontario and grew up to be the first Canadian to command a spaceship, as well as the first Canadian astronaut to walk in space. He’s a New York Times bestselling author who became a YouTube sensation when he captivated the world through social media with his photos, stories and music while onboard the International Space Station in 2013.  This list is only a tiny portion of his accomplishments.  With experiences like these, Col. Chris Hadfield will be a fascinating and engaging speaker.

“This is an amazing boost for our area,” stated Penny Barton Dyke, Executive Director of the United Way for CKL.  “Col. Hadfield is internationally renowned and so inspirational.  We are excited to have his visit coincide with both the 150th Anniversary of Canada and the 50th Anniversary of our United Way!  We are grateful to the Three Chairs Committee and the sponsors that have made this fundraiser possible.”

Barb Truax of the Three Chairs Committee said, “Our goal is to host a successful and entertaining event to show our support for the United Way.  The UW funded 11 agencies to help 30,000 people from our community last year.  When the idea was spawned to find an outstanding and interesting keynote speaker … Col. Chris Hadfield was our immediate first choice.  He often speaks to much larger crowds and in much larger venues.  We are just thrilled that he will join us here in Lindsay for an intimate evening in our beautiful, historic Academy Theatre.”

Tickets to “Out of This World with Col. Chris Hadfield” are available now at the Academy Theatre box office (705) 324-9111

Kelly Maloney and Laurie McCarthy from the City of Kawartha Lakes and Nicki Dedes and Andrew Brooks from the Olympia Restaurant present the United Way’s Penny Barton Dyke and Shantal Ingram with a cheque. The funds were raised from the very successful 100 Mile Dinner held in September at the Olympia. The 100 Mile Dinner is an annual event that raises funds for the United Way for the City of Kawartha Lakes and Kawartha Choice Farm Fresh. 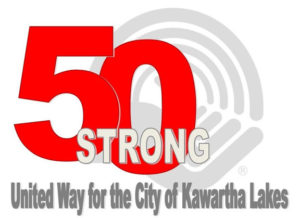 Celebrating 50 years of the United Way

Get your own poster to put up – here.