United Way for the City of Kawartha Lakes is excited to announce the world premiere of The Garden, an original documentary produced by YourTV. This documentary covers the first year of Edwin Binney’s Community Garden – an innovative food security initiative that has provided over three tons of fresh vegetables to non-profit agencies and food banks across the City of Kawartha Lakes.

“This movie celebrates community leaders and how partnerships are key to the creation of a highly productive garden,” says Penny Barton Dyke, Executive Director or UWCKL. “It shares the story of a community willing to seize the opportunity to create a response to produce higher yields of food to support food programs while simultaneously creating a unique experiential educational centre for Fleming students and local elementary and secondary schools,” she adds. 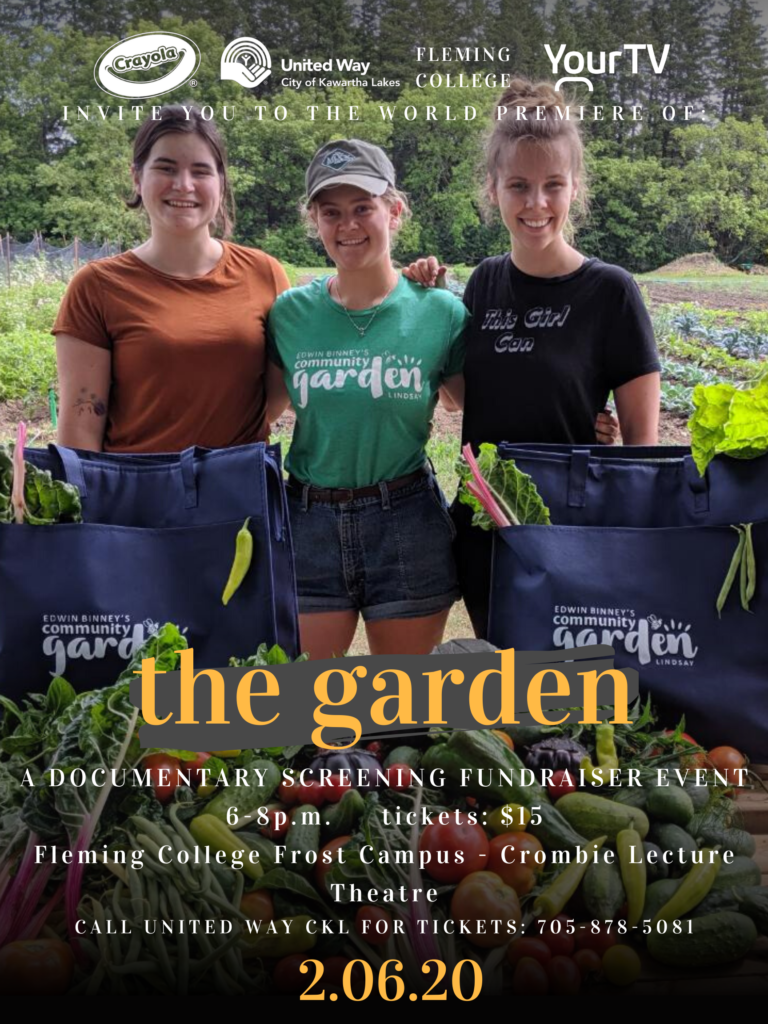 This completely innovative garden is located on roughly two acres of Crayola Canada’s previously unused land in Lindsay. In its first year of operation, Edwin Binney’s Community Garden provided more than 5,500 pounds of fresh vegetables to ten food banks and eleven social service agencies in our community: supplementing budgets for agencies while providing healthy and fresh options for their clients. At the same time, our staff hosted educational agriculture workshops for 350 children from 15 summer camps and school classes.

“The excitement and enthusiasm of the United Way CKL were enough for YourTV to become involved in the process of documenting Edwin Binney’s Community Garden,” says YourTV producer Marcus Ferguson, who directed and produced the movie.

“The transformation from a muddy field to a thriving garden was truly an inspiration and we couldn’t be more proud to be a part of it. YourTV looks forward to sharing this special program which will serve to document not only the transformation but the effort to assist the community in combating hunger through community gardening,” he adds.

More than anything, this event is a celebration of community and the power that comes from working together. The documentary features interviews with the Dean of Fleming College Frost Campus, the Mayor of the City of Kawartha Lakes, Managers of Crayola Canada, and some workshop participants.

The event will take place at the Crombie Lecture Theatre at Fleming College Frost Campus from 6 – 8 p.m. on February 6, 2020. Mock-tails and popcorn will be served before the movie, which begins at 6:30. Tickets are available for $15 and all proceeds go toward Edwin Binney’s Community Garden.

We would like to thank our sponsors: Electric Electric, Brant Doyle Plumbing, and Crayola Canada for supporting this cause with such enthusiasm.